Enterprising students at Redcar and Cleveland College will see their work on display this week as a part of a campaign to raise awareness of young carers.

The team was asked by The Junction Foundation to design posters and postcards to put the spotlight on young carers during this, Carers Week (7th-13th June).

Happy to put new skills into practice, creative media student Terae said: “It felt great to be creating something for a real client.”

The 17-year-old from Saltburn said they felt confident they could deliver.

The live brief was the latest project to come into the college's Digital Hub, a new student enterprise launched and run by IT and creative media learners to provide a variety of digital design services to external clients.

Operating two afternoons and one morning a week, the aim is to build their skills and experience by replicating the demands of a real working environment.

Terae and classmates, James and Bailey, came up with three design options for staff at The Junction and their young carers to choose from.

Creative media student James, 16, of Coulby Newham, said: “It was great but also a little daunting to be working with real clients. You knew there was a real deadline, with money and people on the line.”

The Junction works with communities to help make a difference to the lives of children, young people and families.  Its services include offering support to young carers.

With funding from Middlesbrough Council to help cover printing costs, the charity’s young carers’ service co-ordinator, Eileen Cowle, said: “The artwork features the real stories of some of our young carers. We hope to reach as many people as we can by now sharing them with GP surgeries, schools and libraries.”

Working to meet the charity’s brand guidelines, Terae, whose template design was chosen, said: “Young carers are something you are aware of but reading the stories gives you much more of an insight.”

James added: “It is something that I knew existed but not to that level of detail. It makes you question whether you could do that if you were in the same situation.”

Redcar and Cleveland College’s IT and digital media course leader Sam Beel said: “I am so proud of the students and the way that they approached this whole challenge. It gives them a wealth of experience and transferable skills.”

Delighted with the final artwork, The Junction’s schools’ development worker said: “I am proud to take such a professionally produced poster campaign out to schools to promote awareness for young carers. They really do look fantastic.”

Young carers’ service co-ordinator, Eileen, added: “It is amazing that it is young people supporting other young people.” 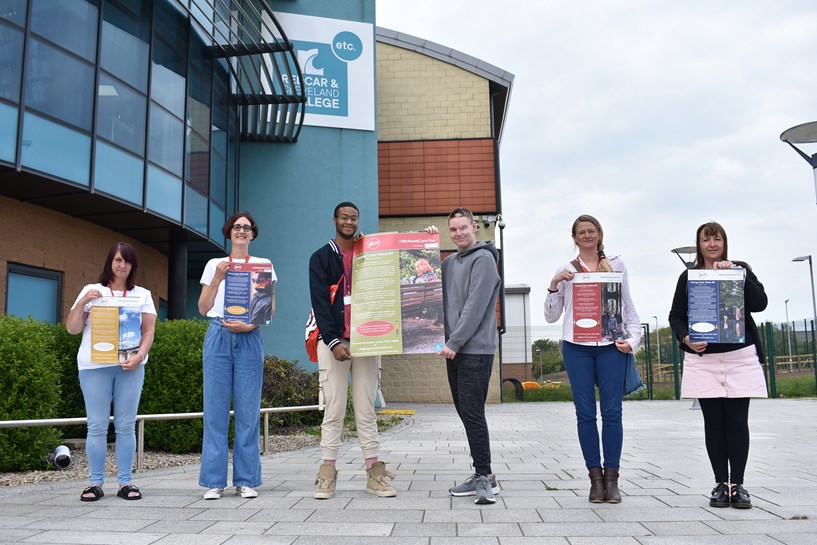